Vietnamese Year of the Horse 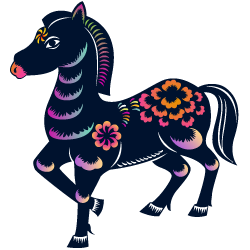 The horse with all its power and might crossed the river all by itself so it thought. When galloping hard after making it out of the ranging river the snake hiding in its hoof popped out scarring the horse half to death causing it to fall behind making it in 7th place.

Compatibility with other signs

Here are some famous people born into the year of the horse: